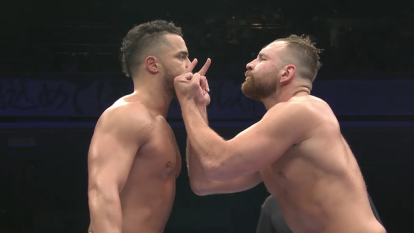 This was for Juice’s IWGP United States Championship.

Moxley was showing fire early on and a willingness to do whatever he wanted to Juice. That caused Juice to raise the stakes. First he went for (and mostly missed) a balcony dive onto Moxley, and then he definitively missed a cannonball splash on the floor that caused Juice to crash hard in a barricade.

Moxley started the match as someone working with nothing to lose. After Juice got and then lost momentum though, Moxley started to work differently. Losing was no longer this abstract idea but instead a real possibility. So Moxley started to target the leg of Juice instead of just recklessly brawling with him.

While that strategy from Mox did not pay immediate dividends, it did give him openings for victory in the second half. Juice’s selling was sporadic at best, but the injury kept popping up enough to give Moxley the opportunities to finish Juice off for good and win the belt cleanly.

Are these two perfect performers? Obviously not, and far from it.

Juice misses big on some spots and then acts like he didn’t miss (alternatively, Juice missing on big spots and then it becoming part of the story on the fly would be awesome). He also in general just works in a way that seems overly broad and soft which can sometimes feel like a rough clash with NJPW’s tone.

Moxley looks as uncomfortable in his movements as ever. There are times where it comes across as a great contributor to the wildness of his brawls, and other times it just is plain awkward.

The flaws in their games though are not the point. What matters is that in an environment where these two could actually play to their own strengths and instead of just swimming upstream against the current of Vince McMahon’s “vision,” they delivered big time.

This was a statement match: WWE is the death of one’s soul, and everyone should leave and start out on their own. (***3/4) 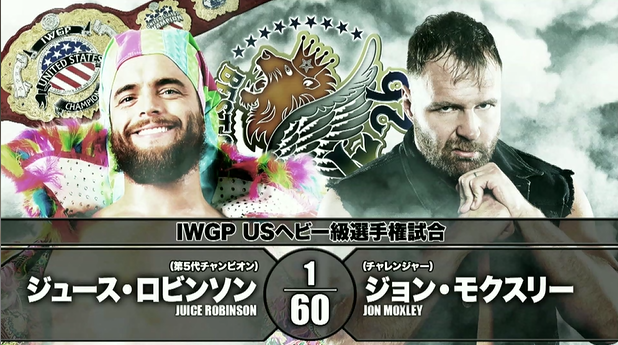 Follow Views from the Hawke's Nest on WordPress.com
My Tweets